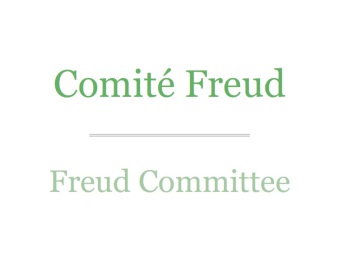 “For a better recognition of Freud’s work”

A documentary heritage that belongs to all of us, for the benefit of mankind, could become accessible to anyone. This is the ambition of the UNESCO “Memory of the World Programme”.

We consider that Freud's work is crucial. It is a work of civilization and culture. It brings people together within their most private thoughts, and makes them aware of what makes them fight. From now on, Freud’s unmemorable work is unquestionable in our culture but seems as yet to be at times denied.

Most of his manuscripts are preserved at the Library of Congress in Washington, accessible to researchers but not to anyone. What better memorial could be offered than recognition by Unesco .

The Freud Committee’s project came about through efforts of leading French and European intellectuals who included psychoanalysts of every school of thought but also medical doctors, representatives of all the human and social sciences, artists, writers, jurists and politicians.

The committee has been reflecting on a singular and deeply contemporary observation: nowadays, Freud’s work occupies an important position in present day society, something which illustrates the deep upheaval that it caused.

The modernity of Freud's work is totally humanist and progressive. He swept away social taboos and offered news ways of thinking on art, war and politics.

The main goal of the Freud Committee is to have this work recognized by citizens and institutions, particularly in the cultural and educational sphere. This deeply modern reflexion could contribute to thinking on national and religious extremism which nowadays is a universal problem.

An endowment fund has been created. This new structure will help to make this project known around the world.

By creating several boards and councils, Freud’s endowment fund will bring together the greatest minds in the domain of psychoanalysis together with other disciplines in order to share our knowledge so as to implant Freud’s oeuvre in our contemporary and disturbed world.

The aim of psychoanalysis is to provide the subject the power to stand against mistakes and abuses on the part of authority. The relation to others may give him the feeling of being in a state  of competition and aggression, while the need for love and friendship seems to be a priority. The right to sexuality seemed to Freud inseparable from freedom.

Being a friend of Romain Rolland, Freud contributed to Franco- German reconciliation and the establishment of peace between European countries. Being a Friend of Einstein, in order to promote pacifism he co-authored “Why War?”

With President Woodrow Wilson’s analysis, he tried to explain that the Versailles Treaty (1918) was a mistake. Freud was a scientist, a clinician but also a visionary whose work is a source of wisdom and humanity.